My mother loved Charles Dickens. When I was in 6th grade she read to me A Tale of Two Cities. The beginning lines have stayed with me and remained relevant all my life;” It was the best of times –  It was the worst of times”. When I was in 8th grade our shared reading was David  Copperfield.  But the story I have most loved is  A Christmas Carol. I’ve been blessed to see the Guthrie Theater production more times than I can count since its first performance 43  years ago.  I’ve introduced my children and grandchildren to Scrooge and Tiny Tim both at the Guthrie, in television movies and in beautifully illustrated books.

I was overjoyed recently when I saw this announcement in the local newspaper: “there will be a  Guthrie Christmas Carol after all and at a time when our bruised and battered spirits could use it most.” A film adaptation of the script that Dickens himself adapted and performed will be streaming  online during the Holidays.

A Christmas Carol was first published in London in 1843.  The novella can be credited with the rise of Christmas as a holiday during the Victorian era and introducing new Christmas traditions, condemnation of greed, and Scrooge’s redemption as a hopeful message which enforced the idea of Christmas charity toward those less fortunate.  It has been said that Dickens more or less invented Christmas as we know it, and for him kindness was the most cherished human virtue.

Dicken’s beliefs come through in the words of Scrooge’s nephew, Fred: “There are many things from which I might have derived good by which I have not profited.  Christmas among the rest. But I am sure I have always thought of Christmas time, when it has come round – apart from the veneration due to its sacred name and origin, if anything belonging to it can be  apart from that- as a good time; a kind, forgiving, charitable, pleasant time; the only time I know of. in the long calendar of the year when men and women seemed by one consent to open their shut- up hearts freely, and to think of people below them as if they really were fellow passengers to the grave and not another race of creatures bound on other journeys. And therefore, uncle, though it has never put a scrap of gold or silver in my pocket, I believe that it has done me good, and will do me good; and I say God bless it!”

As I write this blog we are  midpoint in advent 2020. We have all felt to some degree the “bruises and batterings” of this year on so many fronts. It has been comforting to turn to “my old story” – A Christmas Carol to follow the transformation of Ebenezer Scrooge, described in the beginning as  “an excellent man of business, hard and sharp as Flint, from which no steel had ever struck fire”. Scrooge’s response to his nephew Fred’s greeting of “Merry Christmas” was “Bah! Humbug!”

Dickens shows us the conversion process which happens on Christmas by means of a spirit (or ghost) leading Scrooge on a journey through Christmas Past – revealing his lonely childhood and relentless pursuit of wealth as a young man;  Christmas  Present– inviting him to witness bountiful joy and festive celebration never imagined: To Christmas Yet To Come– predicting  the grim foreseeable future of Scrooge if he dies without redemption. This could be a useful reflective process for us as we approach the coming holiday: taking time to remember past Christmas’s; creating present Christmas in a very difficult year – adapting to Covid; and imagining how this year will affect how we celebrate Christmas in the year to come.

Of course, after all these years we know the ending of Dicken’s story. The capstone of Scrooge’s redemptive Christmas journey – his Christmas visit to the family of his humble clerk Bob Cratchit, where he meets Tiny Tim, Cratchit’s small crippled son whose only hope of living depends on the generosity of Scrooge.  “Spirit,” Said Scrooge, who felt sorry for Tiny Tim, “tell me if he will live.”  “ I see an empty seat”, replied the ghost , and a crutch without an owner. If these shadows don’t change in the future, the child will die.”

In the end, Scrooge did it all, and infinitely more: “ To Tiny Tim, who did NOT die, he was a second father. He became as good a friend, as good a master, and as good a man as the good old city knew, or any other good old city, town, or borough, in the good old world. Some people laughed at him to see the alteration in him but he let them laugh, and little heeded them for he was wise enough to know that nothing ever happened on this globe, for good, at which some people did not have their fill of laughter in the outset; and knowing that such as these would be blind anyway, he thought it quite as well that they should wrinkle up their eyes in grins.  It was always said of Scrooge, that he knew how to keep Christmas well, if any man alive possessed the knowledge.  May that be truly said of us , and all of us!”

My hope for you as readers of this blog is that this beloved Christmas tale will be a blessing. Charles Dickens tried to lift minds, spirits, and hearts in his troubled time with this little story. And in the words of Tiny Tim: God Bless Us Every One! 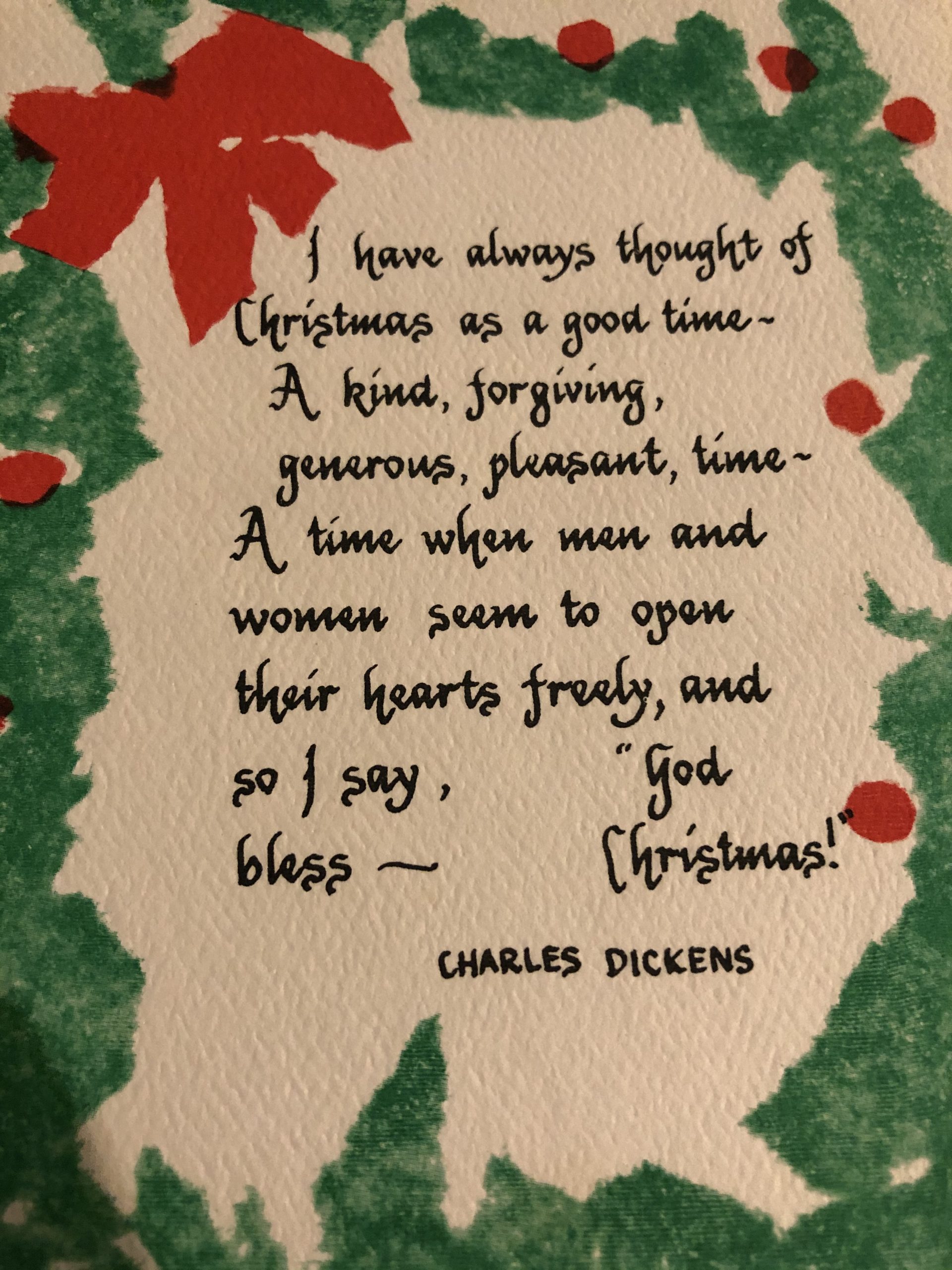